With our salsa group, we visited Trinidad for two nights. It was unusually cold with wind and some of us were wrapped with fleece and a heavy sweater for the evening dinner!

The group decided to have a relaxing afternoon beach outing to the Ancón Beach, after demanding (!) five-day dance sessions. While our Swiss group lazied around on the beach getting suntan, Philippe and I, non-beach-lying-around-people, went for a swim and then a beach walk. The water was refreshing!  In the evening we all enjoyed watching the sun setting over Mojitos…

The town was colorful with perfectly preserved colonial-style houses. Yet it has a peaceful country feeling, local people passing by on the horses or horse carts on the cobbled streets and calling out to sell bread and sweets (white, brown meringue, overly sweet looking cakes, etc.)

After the group left again for Havana, we stayed on and we went up to the hill behind the town. The amiable guy who works at the radio broadcasting antenna let us go on the roof of the building and we had a sweeping view of Trinidad, the sea and its surrounding mountainous area. According to him, the surrounding area used to be sugar cane fields, with the white colonial house in the middle, which turned into a psychiatrical hospital now.

On the next day we went for a two-hour hike to the Javira waterfall in Parque El Cubano (its steep entry fee at CUC 10 per person!). It was a well maintained path and we enjoyed an easy walk, appreciating quiet nature. It was refreshing to be in the nature and I (Yasuko) got my mountain fix – I am not a city person so I need occasional nature injection to keep going : -)

On our last evening we had dinner at the restaurant Cubita. For the first time since we arrived, we enjoyed excellent customer care paired with a good business sense. Not something very common in semi-socialist Cuba. To finish the day, we went to the Casa de la Musica, which, much more than a „casa“ was a stone stairway filled with people, music and dancing. For the first time, we could make sense of the rumba dance show. Thanks to Ismaray and her crew.

View from the top 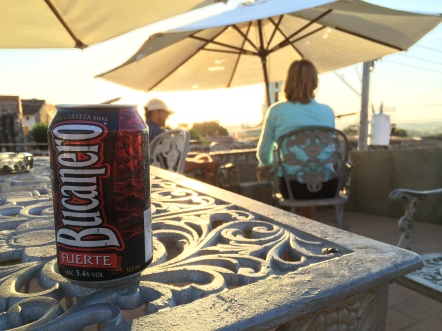 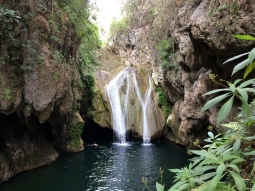 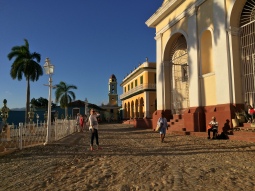 ← Hiking in Viñales’ splendid Nature
Dancing away in Havana →