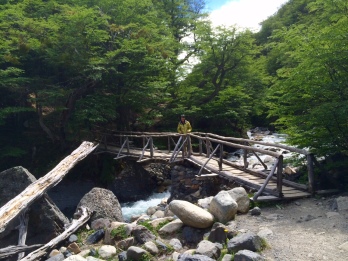 The logistics to get to Los Torres del Paine is complex. First we had to take a 7 am bus for 2.5hrs to get to the national park entry about 112km away from Puerto Natales and after a short introdcution by the national park staff, we changed to a shuttle bus heading for the trailhead.

The heavy clouds made me concerned but I was nevertheless excited to start this hike. Immediately after the bus left the town the expansive Patagonian steppe continued miles after miles, zigzaging the hills and passing hundreds of wild guanacos (llama-like animals) gazing on the hills.

Finally the bus dropped a  full load of hikers with their heavy backpacks at the trailhead.

After 15 min. of walk, the luxurious Hotel des Torres appeared and Philippe wanted to make a short stop for what he thought to be the last acceptable expresso for a week (which proved to be true).

Now fuelled by espresso and hot chocolate, we shouldered our heavy backpacks and started our hike.

Our first destination was the Refugio Chileno where we would stay for a night. There we dropped our backpack and headed for the Torres del Paine viewpoint.

There were a lot of hikers on the trail, including a group of teenagers for a school outing. The trail was uphill and narrow, traversing the gravel, sometimes slipperly, mountain slope.

After arriving a the refugio earlier than expected,  we made a short lunch stop at the terrace before heading for the mirador (viewpoint), with a light daybag only. It was quite steep up for one hour. In the meantime, the sky opened up and the weather turned out to be fantastic.

The last climb through gravels and rocks opends suddently to the white-green glacier lake and soring granite pillars of Paine (2’850m)! Stunning!

Even though we had to share this view with hundreds of people and some men who proved their heroic maleness by jumping into the glacier lake, we admired the view…