Posted on September 9, 2020 by wandererya 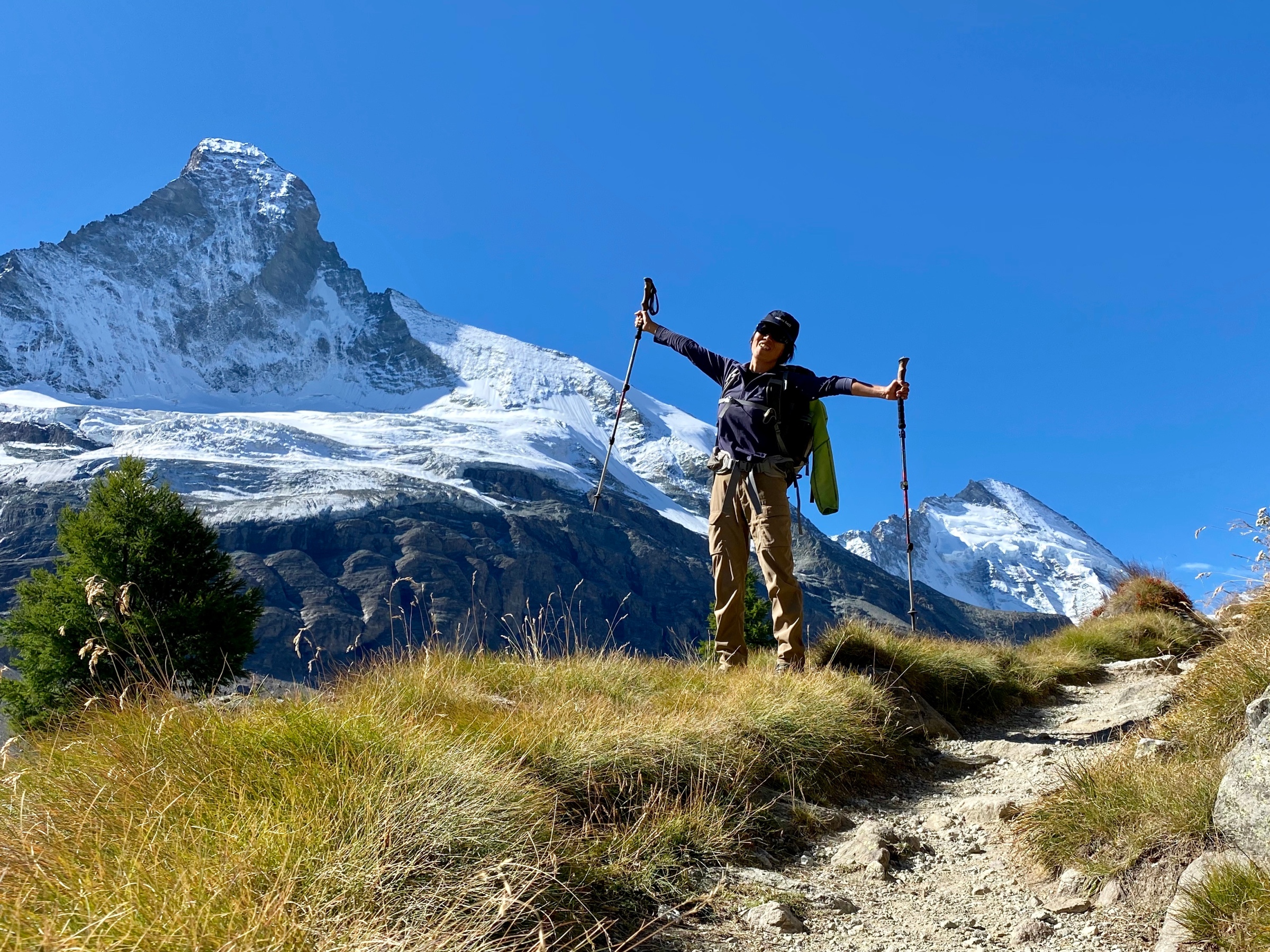 Two years ago we went to the famous Hörnlihütte, the main base camp for climbing the Matterhorn. There is another hut which is at the north side of the Matterhorn, called Schönbielhütte. That rather remote hut is today’s destination and should provide a grand view of the “North Face”. 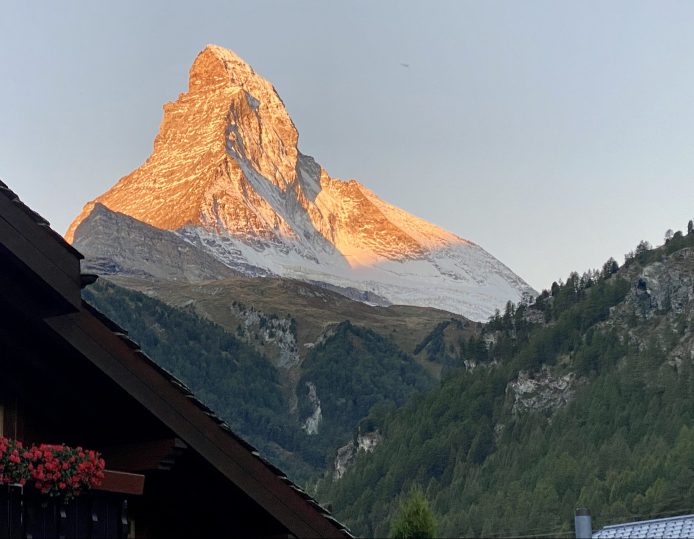 Our 2nd day starts with a shining Matterhorn and blue sky!

There are a couple of ways to get to Schönbielhütte and Philippe figured out the way which requires least upward walking. He is really good at it, figuring it out, not walking uphill, that is. So we started from Schwarzsee.

We packed the sandwiches and the motivational cookies and queued at the cable car station at 8:30 am. It was already surprisingly busy with hikers, bikers and skiers. The gondola whisked us all masked passengers up to Schwarzsee at 2583m.

From Schwarzsee a shining Matterhorn was awaiting us as it did for the last couple of million years (certainly, not all of it shining). We started walking, after taking the mandatory touristy photo of the Matterhorn sign.

… still at the trailhead

The path down to Staffelalp is very wide, as it is designed for skiing in winter. I found the path rather uninteresting but pleasantly quiet. It was still around 9 o’clock in the morning and the air was fresh. dThere was almost no one on the path and it was a welcome change from yesterday’s touristy walk.

Going down from Schwarzsee to the valley of Stafel 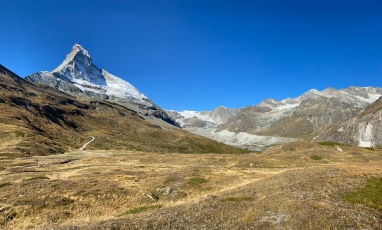 Soon we came to the water reservoir and fork to the other side of the valley where we walked through the woods with pine trees, which gives a different landscape from a normally tree-less terrain at such altitude. At the bottom of the valley is a gigantic hydroelectric plant area which was built in the 1950s, using the humongous amount of water flowing from the Zmut Glacier. We had a break for sandwiches, i.e. early lunch, aka 2nd breakfast, while some mountain bikers were passing by. There are some mountain bike paths, which Philippe noted – maybe for future rides with Patrick & Katharina.

Matterhorn above the pine forest 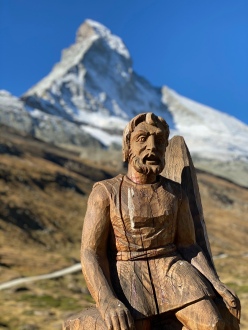 This was the perfect place to look up the Matterhorn climbing route from the Hörnlihütte to the peak. With Philippe’s binoculars, we could see several parties climbing up the impossible-looking edge.

Above us, a nerving helicopter was busy going back and forth at full speed, flying snow cannons up to the slopes as winter is closing in.

After crossing the stream we walked up steeply to the flank of the mountain and then along the moraine. Along the Zmut Gletscher and some scary-looking ice holes, the path continued gradually up. Soon we could see the hut on the top of a large lateral moraine. Up it goes… 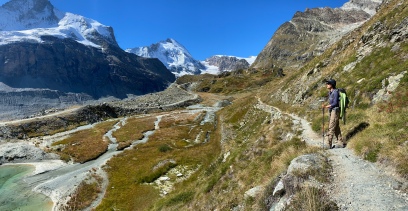 Several streams flow down from the Zmut Glacier 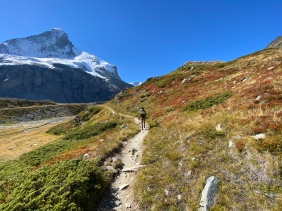 We were happy to be up there and had a well-deserved lunch, taking off our shoes and relaxing, enjoying the entire north side view of the Matterhorn, the Zmut Glacier and playful marmots. This is a completely different perspective from yesterdays. After lunch, I walked around the area, while Philippe made a side trip to the hut for beer and cake (funny combination). 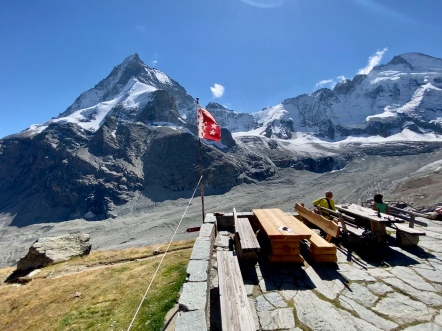 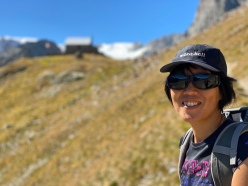 On the way back we wanted to take the gondola down from Furi to avoid further knee-hurting downhill time. But we ended up in Zmut on the wrong side of the river.

On the way down to the valley of Zermatt

By this time Philippe had enough walking and we needed an urgent rescue plan (also called “break”). He decided that the super cute Restaurant Z’Mut in Zmut would be our early dinner stop before heading down another hour to Zermatt. The tasty safran noodles, the rösti with mushrooms and a glass of red, nicely helped to refill our batteries. 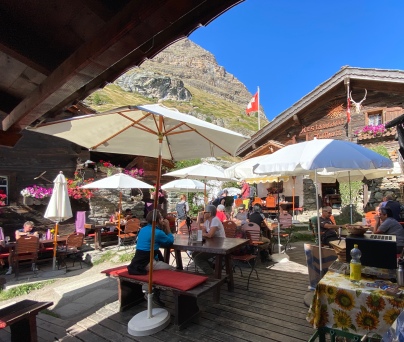 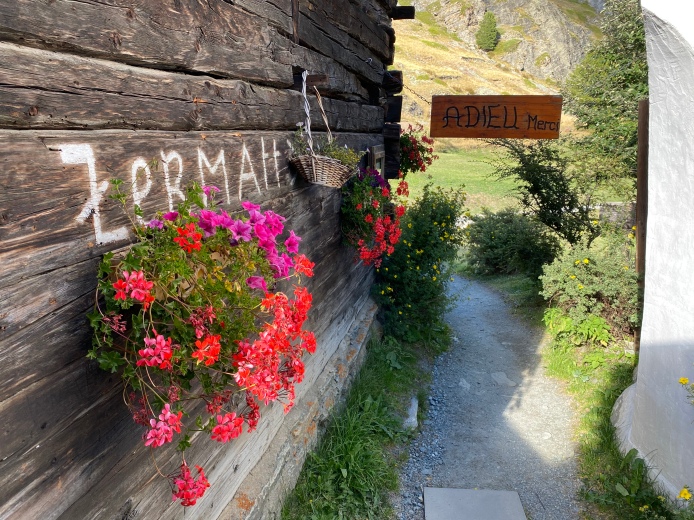 The hike was rather long, but it provided us with a fabulous viewpoint of the Matterhorn north face as well as a varied landscape. We were happy to see another corner of the Zermatt area.