Today we decided to try “the wettest national park in Costa Rica”. After driving through the bumpy gravel road and passing the bridge with a “bridge in a bad state” warning and arriving at the park, Philippe and I tried a short trail, Sendero La Catarata, leading to the river and waterfall. The forest is moist and very wild, thick with verdant ferns,  abundant epiphytes (air plants) and towering trees. Eclectic blue butterflies were flying around above the stream and we could hear several bird calls including a very distinctive, metallic call of the black-faced solitaire. We were completely alone on the trail in the dense jungle-like rainforest. Even though it started raining slightly, I decided to put on my rain gear and aim for another trail, Sendero Natural Arboles Caidos. Philippe opted for waiting for me, as it seemed uphill and too sweaty for his liking. It was a 2 km trail only, so I thought it must be easy. As I started, however, it went up and up and up only! The trail was muddy and the montane rainforest was getting thicker and more misty due to the rain. It became also darker and darker. I felt as if any wild animal could lurk in the jungle-like forest and jump out in front of me anytime. I had to admit I was a bit scared!  At the park entrance we saw stuffed wild cats so I knew there were here…. I was also certain that nobody was on this trail (this national park is not so frequented by hikers on weekdays) and we saw only a couple of cars in the parking. I tried to hike through the trail tangled with tree roots and mud, and getting over several fallen trees, not getting my foot caught. After a never-ending (it seemed) trail down, I was greatly relieved to come out to the main road. Philippe was standing in the rain and waiting for me, a bit worried… 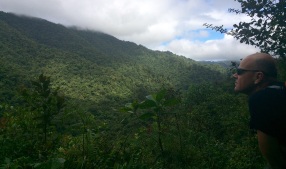 RC soaring in the mountains