We were leaving Jasper today for heading back to Vancouver (a total of 800km) and we were sad to leave Canada’s vast and wild national parks.

Immediately after leaving Whistlers Campground, we noticed all the cars in front of us slowing down; There were two elks walking nonchalantly in the middle of the road!

As our guidebook mentions, Jasper was surely a good place to spot wild animals. Even in the campground, we could observe small and bigger animals. Apparently, bears appear even  in the campground so there was a bear warning notice: I hesitated to go for a morning walk alone : (

After some drive,  the majestic snow-laced Mt Robson (3’000m) appeared and we made a quick stop to admire the view.

Heading south from there, the forest continued along the Yellowhead Highway except for a couple of small towns (or villages?) with a gas station and a hamburger joint. We could feel the vastness and remoteness of Canada!  We could not find a good lunch place so we stopped our camping car and had a roadside lunch with the view of the Thompson River.

We were originally planning to make a stop at Kamloops and stay at a campground. After checking a couple of them, we thought they were too much in the city or close to the highway.

We decided to drive another 40km to a provincial park campground, Lac Le Jeune. It was a peaceful place at the lakeside surrounded by the forest. Some families were there, BBQing, kayaking, and fishing. Apparently, it is a good spot for rainbow trout fishing. We happily settled down for a night. 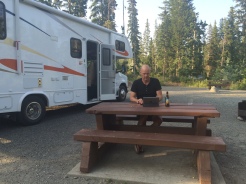 Elks parading on the highway