After a copious breakfast, the steep ascent to the Notch (2’510 m) awaited us. The last part of the climb was 45-degree up, and we struggled over snowfields and gravels, while stones and gravels were falling from our footsteps.

The ridge walk from the Notch was the highlight of this trail. 360-degree panoramic view under the blue sky and strong wind. Re-fueled by the magnificent view and yummy brownies and cookies from the Lodge, we started descending to the vast Athabasca Valley.

Wild animals, particularly marmots, often appeared on our trail, and they seem not to be afraid of human presence.

On the way, we met a friendly Canadian couple in 60s, who often travels in the Arctic in a canoe for a month! They determine a place, get flown in by helicopter, and call per satellite phone when they want to be flown out again. They pack a one-month supply of food in a canoe and just travel. What an adventure!

By this time Philippe got tired and became dead silent. Around 10 km before the end of the trail he said with desperation, “I had enough! “. We, however, had two more hours to go and could not take a tele-cabin like in Switzerland, so he had no other choice but to keep walking.

The last 8 km of the Signal Mountain fire road, in particular, was known for bear appearances so it looked as if a bear could be lurking anywhere in the dense forest and jump at us (even if bears neither lurk nor jump). We kept blowing our emergency signal whistle and kept the bear spray handy. Propelled by an uneasy feeling and persistent mosquitos again, we were walking at astonishing record speed. We were happy to come out from this mosquito-infested, bear-inhabiting forest, shook off our boots and put our feet up for a while.

Yasuko at the Notch 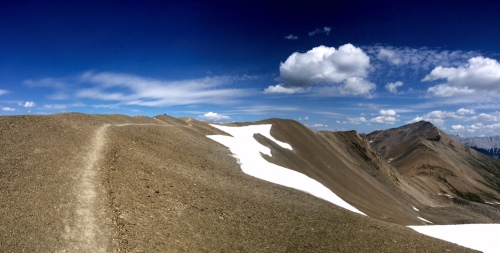 Looking down to Snowfield