The Juan de Fuca Marine Trail is a 47km wilderness trail which is just south of the famous West Coast Trail. Today we walked the first section of the Juan de Fuca Trail from China Beach to Bear Beach (9km) via Mystic Beach.

The info board at China Beach warned us, “You are in Bear and Cougar Country” : (( It was a nice start but we felt slightly encouraged by a number of cars which parked in the parking lot, assuming that bears and cougars would choose more round people (the choice is impressive) than a Japanese who has not so much meat on her bones…. I would if I were a bear.

The trail started in a dense forest and it continued on. That surprised us because I thought the trail was along the coast. We arrived soon at the first beach, Mystic Beach, which was a narrow, beautiful sand and pebble beach. After a break, we continued on. The trail was to pass many creeks, more than ten, which meant that we went down to a creek, cross a bridge and up again and back to the forest. These ups and downs were a little too many for Philippe´s liking.

When we finally arrived at Bear Beach, several campers had already set up their tents in the wind. After looking at the map again, we realized that there was no access path to the road so that we could hitch-hike back to our trailhead. We have to keep hiking another 18km to the next trailhead or walk back the same path (9km). Of course, our choice was clear.

The trail was mostly in the forest, which was unexpected, but nonetheless, it was full of magnificent trees with occasional spectacular views of the wild Pacific coastline. 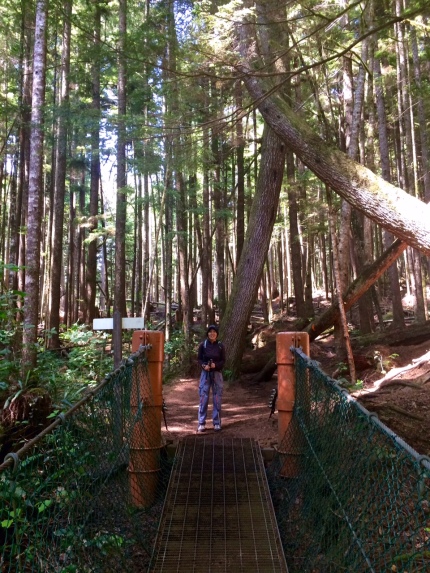 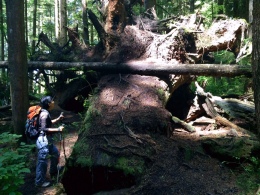 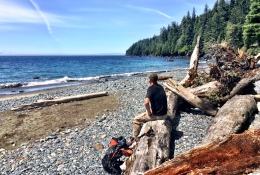 Many creeks and steps

Trail in the deep forest

Bear Beach, but no bears… 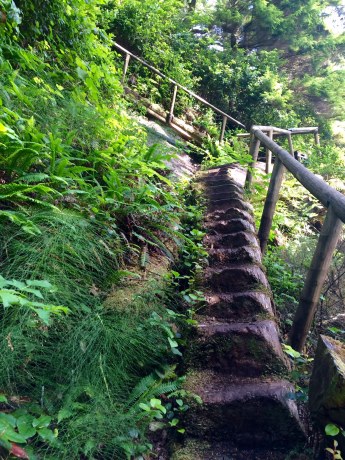 Steep ups and downs to the beach

← Evening Walk in Sooke
Sooke in the Mist →