Via Alpina, Grindelwald to Wengen

The breakfast place was full of Indian and Korean tourists. Maximum calories intake again and off I went for another sunny morning.

The sun was up above the mountains and the sky was crisp blue, but the path skirts at the bottom of the towering Eiger and in the complete shadow of the massive Northface.

The yellow hiking path sign says 4 hours (of course, up!) to Kleine Scheidegg.  I told myself, well, it is one hour shorter than yesterday.

I met two middle-aged German hikers who were also heading for Kleine Scheidegg. Looking at the imposing Eiger Northface and eyeing the mountain train passing by, we went steadily up to Brandegg.

After a while, the path turned to the car road and we continued on. Soon I realized that I needed to turn somewhere to get to Alpiglen and took a wrong path : ((
I debated myself if I should cross uphill to the official path or go back. My GPS map showed there was a small stream in-between (in general it means going steep down and steep up) and the forest looked dense. It was too risky.

I was upset with myself because the official path passes the “Eiger Trail” which I was interested in walking.  The two Germans behind me also missed a turn and came up just behind me. After looking at the map for a while, I decided to keep going on this rather boring car-road till it crosses the official hiking path.

In another half an hour or so I finally came out of the forest to the open field where the car road turned to dirt road and finally met the hiking path. I was face to face with the massive rocky Eiger Northface! There a large board shows several Eiger summit routes. The Northface looked vertical and it made me wonder who wants to go up there!

After around three hours from the start I was standing at Kleine Scheidegg (2061m).  The Kleine Scheidegg was in the full sunshine and buzzing with tourists who came up by the mountain train.  I thought of eating something warm at the station restaurant terrace (only one which was open), but soon I moved away escaping from the noise and the crowd.

Going up a little further, I found a quiet viewpoint. I had a stunning view of the Eiger, the Mönch and every other mountain in the area. I had my bread and snacks, fully taking in the fantastic scenery with bliss.

My lunch spot with a view!

It was still past noon and I decided to go up to Eigergletscher (2320m), which is one hour away.  I hiked up already 1000m today and I could have said it’s enough for today, but it was too bad to leave this wonderful area so soon and go down to the valley. 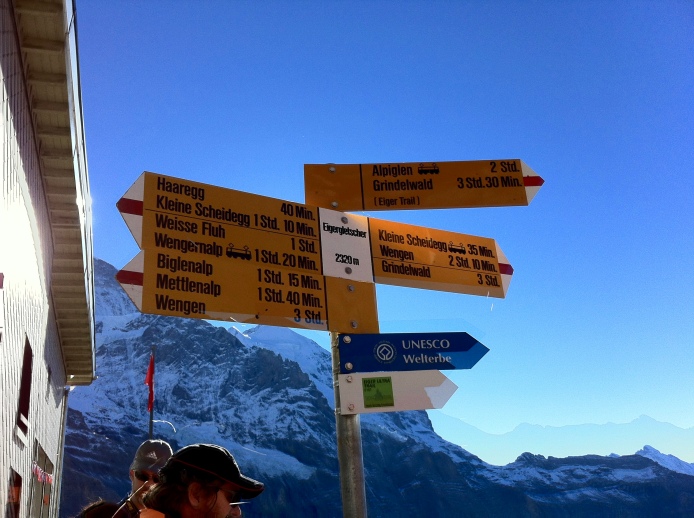 Near the Eigergletscher, I met a friendly woman who was about to do the Eiger Trail.  I chatted with her and thought of doing this today, but it was already at 14:30 and I needed to go down the valley.  Oh well, next time! I have another good reason to come back to this treasure hiking land.

Start of the Eiger Trail

After watching the Eiger Trail and the woman who was walking that path for a while with envy, I finally started to go down to the other side of the valley.  The view was again spectacular. I looked back many times to see Eiger, Mönch and Jungfrau.

The postcard beauty of Eiger and Mönch with the red Jungfrau mountain rail. 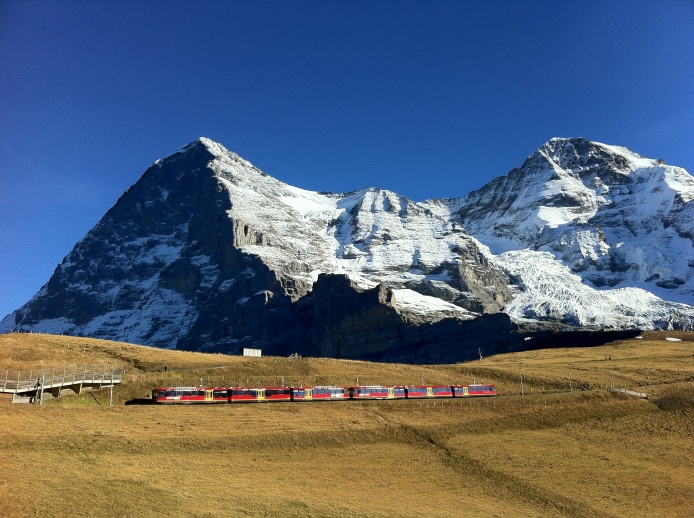 The truly amazing four days of Via Alpina!  It was like in a dream.

The next section goes over a 2600m pass and November is getting too late for this.  I have to do the rest of Via Alpina to the next year.

← Via Alpina, Meiringen to Grindelwald
Jura Höhenweg 1 – Dielsdorf to Baden →