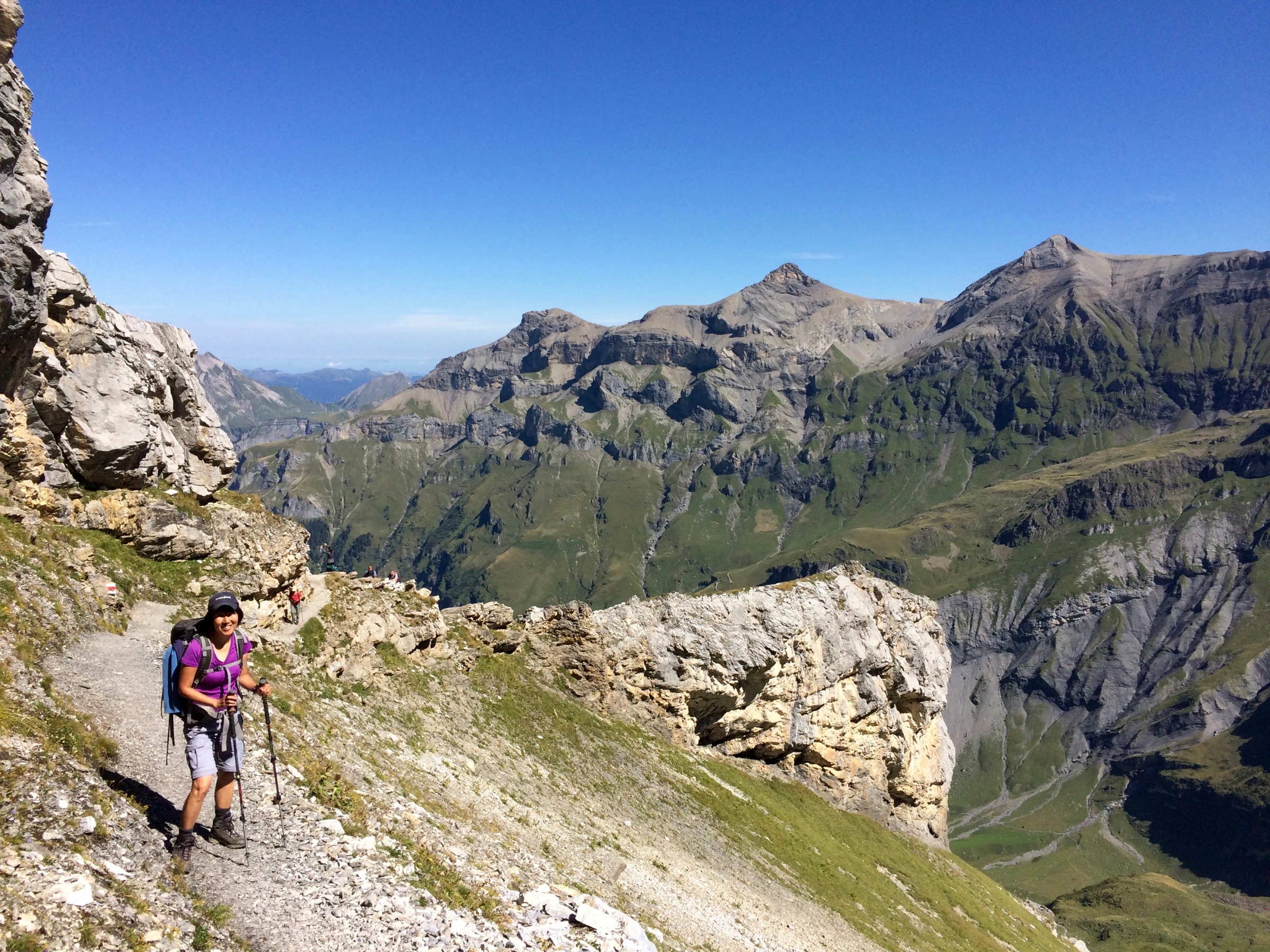 Today is one of the hardest hikes on the Via Alpina route, almost 1,400m up to the highest pass of this trail (2,774m). The Via Alpina has a total of 14 passes.

Unlike yesterday, today the sun is out and the blue sky smiles at us.

After a hearty breakfast, we’re ready for the big day!
Leaving behind our beautiful, cozy hotel, we went down to the village center. Not that we wanted to go down but the route does not give us a choice. The center is nothing more than a bus stop and a couple of hotels. Like us a bit earlier, many hikers were getting ready for the next stretch.

Crossing the river, the climb started on the other side of the valley. The first stretch was through the woods. Several hikers were on the trail as well.  A bit later, we walked through pasture land and passed a couple of farmhouses to finally reach a restaurant at Bundalp (1,840m). It looked enticing, but too early to have a break, we skipped it and continued. 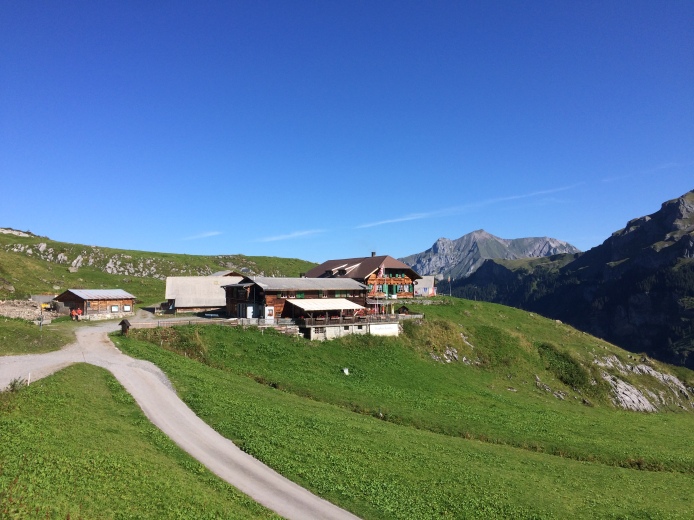 Bundalp restaurant with a sunny terrace

At this time I told Caroline that we had gone up roughly one third of today’s ascent, only another 1,000 m up to go. Not sure whether it was encouraging or discouraging…

A little bit later, the imposing Blümlisalp Massif and the Blümlisalphütte appeared on the hoirzon, today’s highest point as well as our lunch destination. The hut seemed to be sitting on the boulder, majestic, far and away. 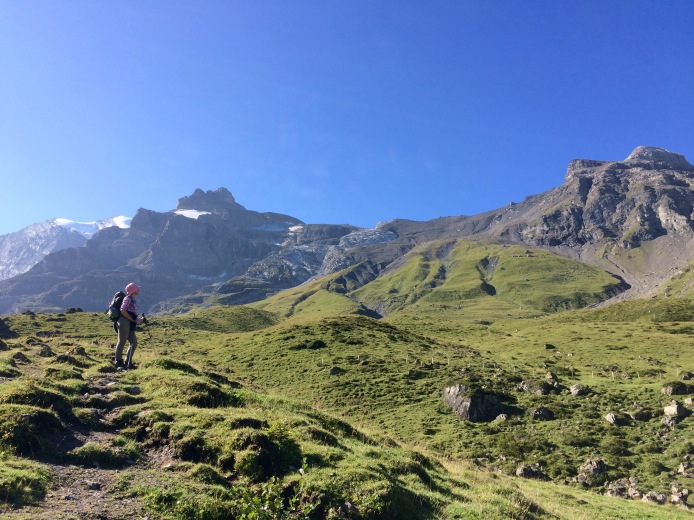 Caroline looking at the pass which looks very far away…

It was very sunny and it seemed a popular route, with a lot of hikers on the trail.

The pass still far away…

The steep slope was criss-crossed with many paths. 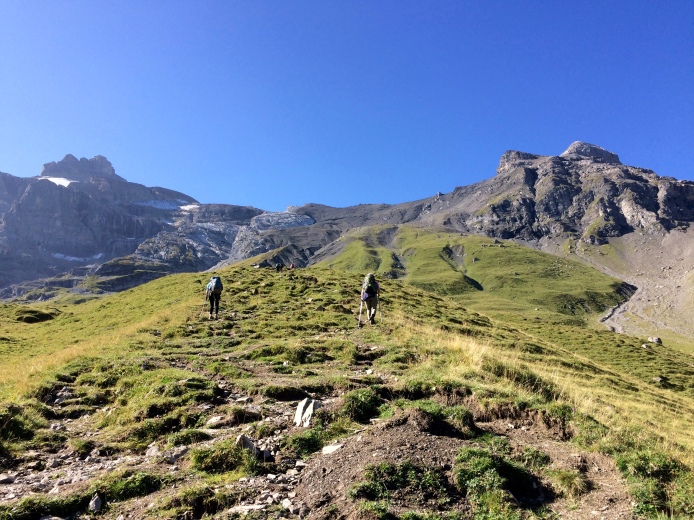 Quite many hikers are climbing up.

We looked up to the hut on the boulder under the blue sky often. What a fantastic sight! The more altitude we gained, the more of yesterday’s path we could see on the opposite side of the valley, even the Sefinenfurgge pass, yesterday’s highest point .
I always love seeing the  travelled route and pass of the day before. It helps me to understand the exact geography of the area. It is like creating your own 3D map in your head.

The rugged Gespaltenhorn (3426m) and Gespaltenhornhütte at the foot were also visible.  The dutch couple we met the day before went into this direction. That route  seemed not funny….

We could see the bottom of the valley which is scary far down!

After we managed some narrow path on the ridge, the famous steps to Hohtürli appeared. The stairs seemed to wind up endlessly.

One step after the other. Luckily no one was coming down and we did not need to cross other hikers on those narrow steps. 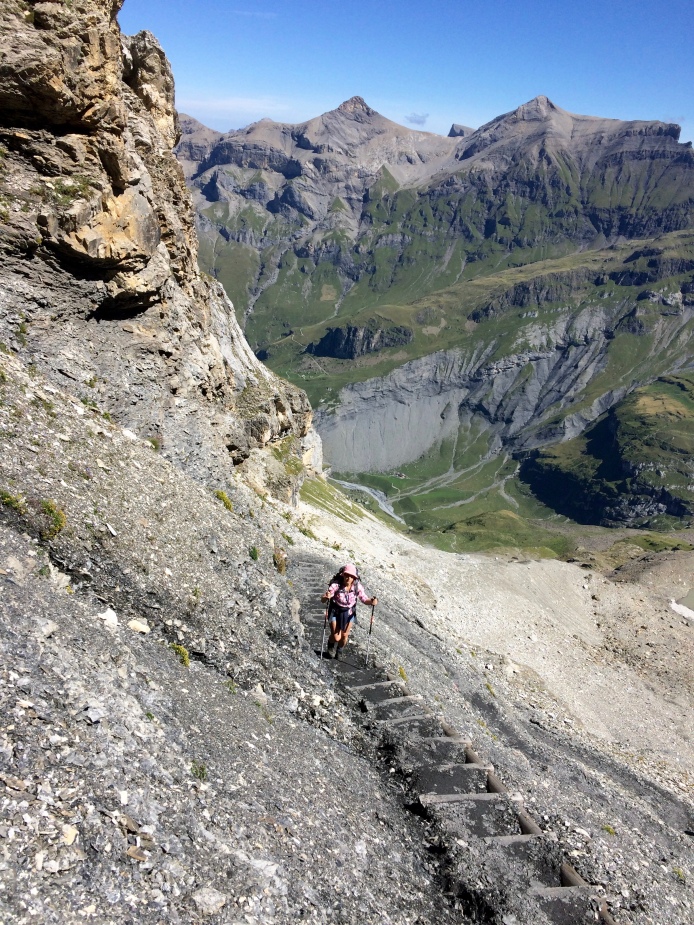 Caroline toiling up the steep stairs. 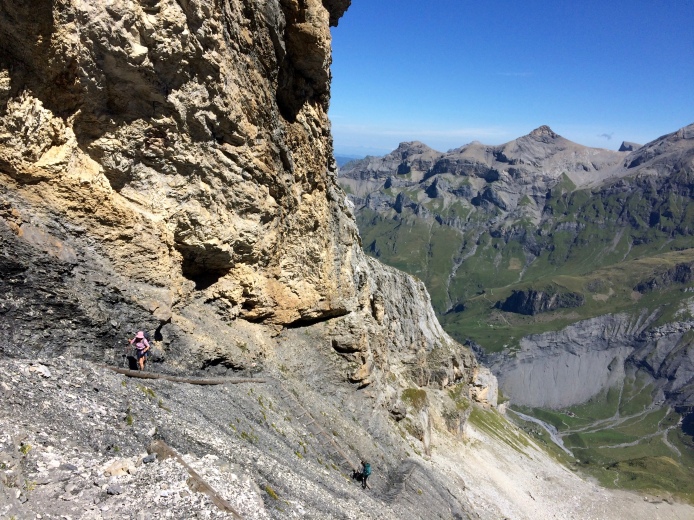 The trail is on the steep side of the rocky mountain…

The last stretch on the stairs looked vertical! The sweat was streaming down on my face while I was concentrating on the steps ahead of me,  not looking at the steep slope going down several hundreds meters.

The last stretch of steep and narrow steps!

After some hundreds of steps, I reached at the top of staircase and Caroline came up just after me and smiled, when seeing the hut in front of us. Done.

Caroline at the end of vertical-looking steps

Finally at the Hohtürli pass!