We were warned by a couple of people about the bad state of the logging road to the San Josef Bay Trail, about potholes, flat tires, no phone signal, and Sasquatchs all over. So we decide to go for an organized tour with Chris and his Cove Adventure Tours. (Note: this road is feasible with a normal car, just take it slow)

It started with a 1.5h drive on a pretty OK but bumpy logging gravel road with the possibility of being forced to back up by logging trucks coming your way and being slightly larger than the road they travel on. But truck drivers were on strike. We would not cross even one of those giants.

We made a quick stop at Holberg after an hour of driving. It’s a small community inhabited by about 80 loggers and a woman running a pub. It’s a very odd place. Lost, forgotten, simple, and certainly important for those working there. It doesn’t seem that there is any other entertainment around Holberg. The owner is about to retire and tries to sell the pub for 340k CAD. No buyer found yet.

View from the Scarlet Pub

Another 30 minutes later, we parked at the trailhead and started to walk. Right at the entrance of the trail, there is a little hut inhabited by a young female park ranger. There, she spends about 10 days in a row before getting a few days off. That place is without running water, electricity, or any phone signal. She loves just that, she sais.

We walked about 45 minutes on an easy trail in the dense forest, which also is the start or the end of the famous and rugged North Coast Trail.

Some locals come fully equipped for a full weekend at the beach. We had the impression that they schlepp a considerable part of their household down to the beach. 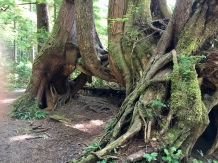 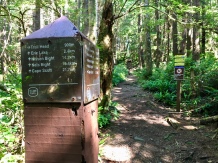 And then we got there. A nice secluded beach with sea stacks and bonsai-like trees. A very pretty and rather remote and enjoyable place. But we still were not sure if the drive and the cost of the tour were justified (actually, we think not).

Just before leaving, we met four hard-core hikers who just finished the 7-day North Coast Trail and happily rested their tired and likely smelly feet while drying their camping stuff. They seemed happy and proud of their achievement – and rightly so. 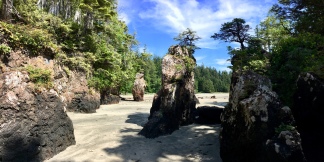 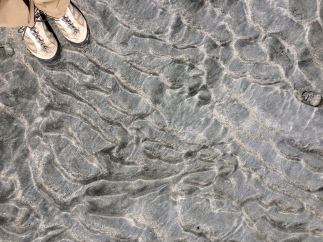 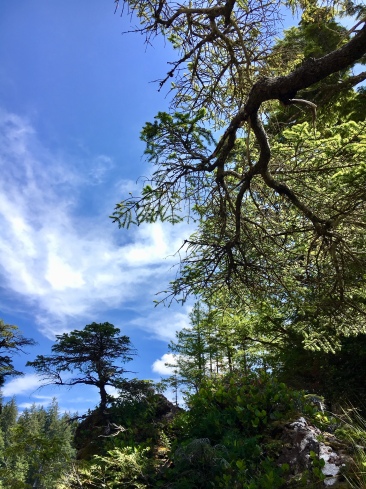