The Open House Zurich, Architecture for all, 2020

Zurich is beautifully illuminated at night. Zurich is, of course, not Paris or Prague, but when we pass the Quaibrücke, we are often struck by the beautifully illuminated bridges and buildings.Behind all this, there is a project called “Plan Lumière”, a city illumination project.  Under the Open House event, we participated in a night walking tour, led by a project leader of Plan Lumière, a lady who is passionate about light in the city! 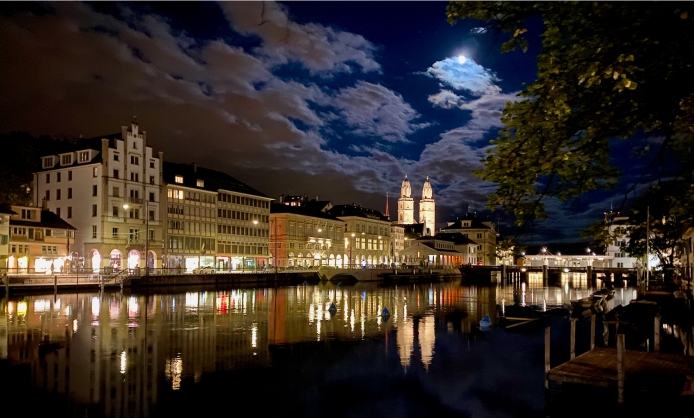 The key idea of Plan Lumière is to create another identity at night, by illuminating the city. It is not just about directing a few spotlights to buildings but to create an atmospheric setting.

For example, the Lindenhof is an important historical place, and the lighting team used just a bit of light to valorize it.  The Lindenhof is illuminated in a way that it somehow floats above the river.

The Limmat riverside,  lined up with churches and historical buildings such as the Stadthaus, is also an important illumination point.  The Plan Lumière team made efforts to harmonize the light throughout the city by negotiating with private owners such as hotels and shop owners who tend to use too much light to make their buildings stand out for commercial purposes.

They have built poles with special spotlights to illuminate historical buildings. Those lights are equipped with some sort of masking element which blocks the lights from – for example – beaming directly into somebody’s apartment windows.

The tour started from Stadelhofen, the city’s first light-up project, and we went through the Münsterhof, a superbly Illuminated square,  then Lindenhof, and on several bridges. The bridge project was quite a big one and lasted several years to complete. Now all the bridges up to  Hardbrücke in Zurich West are lit up.

After the tour, I appreciate the city more and I am just a bit happier again to call Zurich my second home.