Another history of Japanese-Canadians in Ucluelet

Al from Archipelago Cruise talked to us about the Japanese-Canadians in Ucluelet and pointed out the place of their village during our cruise trip.

I wanted to find out more about them so the next day we went to the Ucluelet Information Center which had a small stand describing the history of Isabel Kimoto and her family. 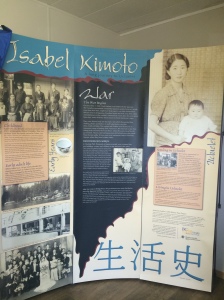 Apparently there was a large community of Japanese fishermen and their families in Ucluelet before the war. However, after the Pearl Harbour Attack, the Canadian authorities considered all Japanese-Canadians as “enemy aliens”, seized their houses and boats, and took them to an internment camp in the Rockies. After the war they could move to Ucluelet and there are still some Japanese-Canadians living in the town.

I learned another piece of this sad history after visiting the Nikkei Memorial Center in New Denver earlier.

← Wild Pacific Trail – Survival on the Edge
Sunset over Tofino →