A forlorn yet fantastic 6-hour trail from the foot of Sassauna to Fadurer Fürggli to Schuders.  In mid-November we enjoyed the unusually sunny weather, witnessing the dramatic fog streaming into the Prättigau Valley like a waterfall.What an amazing natural phenomenon!

The 8:30 am bus from Schiers and then a small mountain cablecar from Fanas (only two of us were in it) takes us to Eggli at 1700m, today’s trailhead.  The air is crisp at 9 am, but the sun is out and heating.  A cute mountain hut which is usually a popular hangout place for paragliders was unfortunately closed due to the autumn break – no coffee for Philippe :- ( 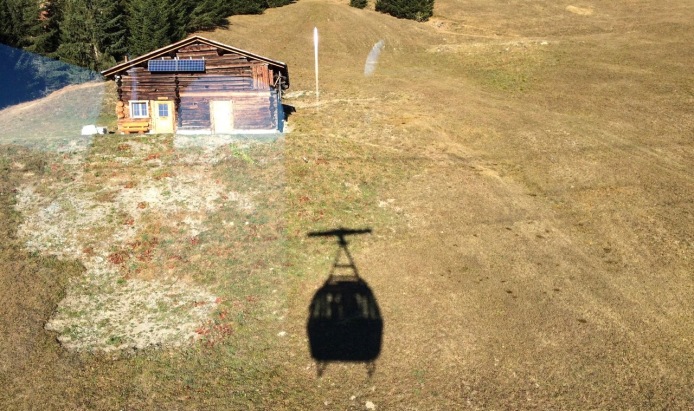 We start hiking up towards Sassauna, which we are rather familiar with. Skirting around the steep mountain flank of Sassauna for an hour, we arrive at Stelli (1978m),  the mountain ridge with a fantastic view of our house mountain Chrüz, the soaring Rätikon mountain range and today’s entire trail to Schuders Maiensäss.  We sit on the bench and admire a sweeping view during a short snack break.  It is Philippe’s first time to be here (the second time for me) and he loves the new perspective of the Chrüz and his favorite model airplane flying spot Gafäll.  The mountain slopes are brown and still look deserted – a different beauty.

From here we start the half circle around the steep valley.  On the way we see three chamois, so jumpy that at the sight of us they dash down the slope towards the relative safety of the forest (it’s hunting season).

We make a wrong turn and walk uphill, mistaking a cow path for our trail, then after coming down to the correct path, continue to a rather large farmhouse at Fadurer Mittelsäss (1839m) which is closed for the season.  We wonder how a farmer gets here, there seems to be no road and the place is roughly 2 to 3 hours away on foot from any side….

Tasty sandwiches in front of this farmhouse, the sun and the view refill our batteries.

Behind this farmhouse the path goes up steeply in the direction of Fadurer Fürggli.  200m higher up there is another small and cute farmhouse at Obersäss and we have another short break on the bench in the sun. We like breaks : )

Now, in mid November the sun on this south-oriented slope keeps us warm – even at around 2000m. At this time there may have been tons of snow by now.

Finally we reach today’s highest point, the Fadurer Fürggli pass (2188m). The north side of the pass is covered with snow and a very cold wind is blowing!  So cold that we only have a quick glimpse of the Schasaplana peak, the Schweizer Tor and the Carschina hut, before happily returning on the sunny south side of the pass for our second sandwich and miso soup.

Fadurer Fürggli; the north side is windy and terribly cold! 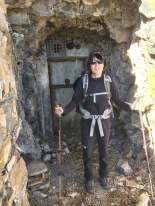 Around this pass there are several gates of Swiss army border defense shelter from the Second World War. This might be due to the Austrian border close by …

On the way down we see thick fog streaming from the Rhein Valley over the mountains into the Prätigau Valley. It looks like big fog wave overflowing and pouring to our side. It’s a dramatic nature spectacle! We can’t keep our eyes from it and stop many times to take photos.

Looking at the fog streaming into the Prättigau Valley

After a long hilly downhill stretch we arrive at the quaint  hemlet of Maiensäss. It is lined with a row of old charming farmhouses, most of which are closed and awaiting winter.

A water fountain at Maiensäss

At the end of the hike, the fog moves up higher and higher to reach the level of Schuders village (1272m) and soon we are in the cold fog! The white sun looks mystical in the thick fog. Our body is getting cold fast while waiting for the 4:30pm bus, but we can’t complain after 7 hours of sun!

The autumn color with the mist