Another sunny day with blue sky in pretty Prättigau.

Yasuko walking to the Bodähütte. 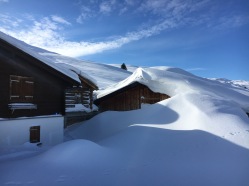 The Alp Valpun in deep sleep…

Today we were ambitious and aimed at Philippe’s favorite mountain spot called Gafäll (2’000 m). The snow on the path to Boden was partially compressed and easy to walk, as it is classified as winter hiking path (“Winterwanderweg”), but after Boden it turned into just snow – no path. We put on our snowshoes,  getting ready for a 400m ascent in deep powder snow. Beautiful … and cardio!

Between Boden and Alp Valpun

After tramping on the snow for two hours, the majestic snow-capped Rätikon mountain range came into a view. We finally arrived at Alp Valpun, 1900m, just underneath Gafäll. Around the same time a group of snowshoe hikers came from the opposite direction,  St. Antönien.

The familiar Alp Valpun, where we come often in summer, was completely covered in snow, including our usual lunch spot.
Philippe’s favorite flying spot, Gafäll, was also in the deep sleep.
We had our sandwiches and a dearly needed cup of hot miso soup. But a light and very cold wind was blowing enough to make my hands and feet numb.

Soon it became too cold to keep standing and we decided to escape from this cold north slope as quickly as possible. To heat up our body we marched down at record speed!

On the way we stopped at the sunny Bodenhütte for a hot chocolate and enjoyed the warmth on our face, chatting away with friendly locals.